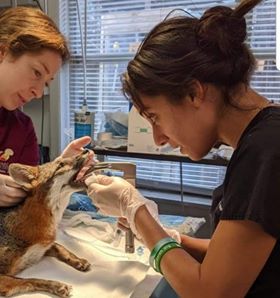 Marjan Ghadrdan has been a CWR since 2011 and received her B.S. in Biology from Kennesaw State University in 2009 and M.S. in Neuroscience at Georgia State University in 2015. Marjan has worked with native, domestic, exotic, and research animals in veterinary hospitals, zoos, and rehabilitation centers all over Georgia and currently serves as the Director of Animal Care at the AWARE Wildlife Center which accepts 1500-2000 wildlife patients per year. She became a part of the CRB board in 2012 and after serving 2 years as the board chair beginning in 2014 was promoted to the CWR Director in 2015 to help grow the CWR program and allow it to reach more rehabilitators across the world. Marjan is on track to become a licensed veterinary technician in 2019.  At home, Marjan cares for her adorable pitbull, Little Mama, who is the love of her life. 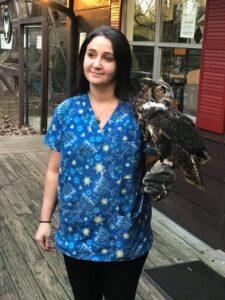 Sami is a lifelong lover of animals and has always had an affinity towards bettering the lives of animals. Her passion for the quality of life of all animals influenced her path through schooling where she received her B.S. in Biology from the University of Georgia in 2016. Knowing her soul work involved helping animals in some way, but unsure of which direction was next, she began volunteering at Atlanta Wild Animal Rescue Effort in Atlanta, Georgia where she quickly resonated with the connection between rehabbing wild animals back to health and limiting the effects of human impact on the earth. In Sami’s free time, she enjoys spending time outdoors and enjoying nature, while also making connections with other people.

Marielle Kromis graduated in 2015 from Kennesaw State University, with a bachelor’s degree in Environmental Science. In 2008, Marielle was a member of the Reef Check team, alongside 9 other students, with Ocean Blue Education. They analyzed various reefs throughout the Bahamas. Their goal was to assess and compare reefs inside the Exuma Land and Sea Park with other non-Marine Protected Areas off of Conception, Long Island and the Northern Exumas. Reef Check divers gained awareness of their own relationship to the sea while gathering pertinent information on coral cover, ﬁsh/invert populations, and site conditions. In 2014, Marielle started volunteering at AWARE and was hired as a Wildlife Caregiver the following year. At home, Marielle spends time with her Border Collie mix, Shanti. 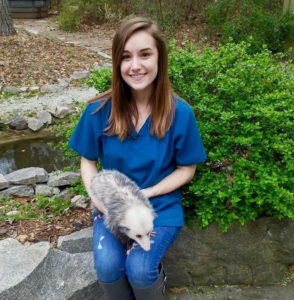 In 2016, Julia Sparks earned a B.A. in Environmental Studies and a B.A. in Economics from Eckerd College in St. Petersburg, Florida. She currently works as a Wildlife Care Supervisor for the Atlanta Wild Animal Rescue Effort in her hometown of Atlanta, Georgia. In addition to caring for wildlife native to the United States, Julia also spent several months volunteering for wildlife sanctuaries in both Ecuador and Bolivia working primarily with ocelots, Geoffrey’s cats and tapirs. In her position as Coordinator for Continuing Education, she hopes to diversify the regions and languages of CE offered in order to connect many more passionate rehabbers around the world. 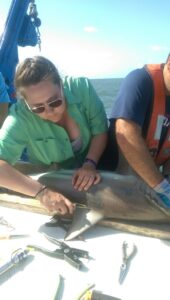 Alex Copeland’s love of animals led her to a career as a pet groomer; a career she has enjoyed for over ten years. While earning her bachelor’s degree in biology from the University of Alabama at Birmingham in 2016, where she concentrated in marine biology, she gained hand on experience at the Dauphin Island Sea Lab. There she assisted with research projects focused on the ecology of sharks and rays in the Mobile Bay Area and a head start program devoted to revitalizing the local population of the Mississippi diamondback terrapin.  After college she began volunteering at various wildlife rehabilitation centers and in 2018 found a home at Atlanta Wild Animal Rescue Effort (AWARE). She is currently in training to become a wildlife care supervisor at AWARE. In her spare time she enjoys spending time with her partner and their dog and three cats. 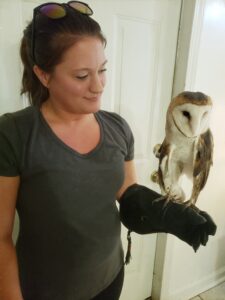 Sara’s educational background includes a B.A. in Psychology and an M.A. in Criminal Justice. Her prior work history includes working for a local district attorney’s office and later in a correctional facility. One day she was asked what career she would choose if she could do anything she wanted. Her response to this question was simply to work with wildlife. She began to wonder how she could make what seemed to be impossible a reality. In 2018, she learned of Atlanta Wild Animal Rescue Effort, an educational and rehabilitation center for wildlife. Sara began volunteering at the center and later became involved with the non-releasable placement team. Knowing she was on the right track to follow her passion she started taking every opportunity available to further her wildlife skill and knowledge. This included enrolling in a graduate-level wildlife management certificate program where she enjoys learning about trophic cascades, limiting human-animal conflicts, and species recovery plans. In her free time, Sara enjoys watching movies, hiking, and snuggling with her cats, Addie and Max. 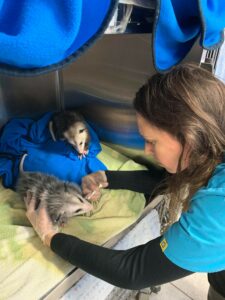 Colleen Burley graduated from Atlanta College of Art with a BA in Fine Arts. Colleen continues her work as an artist as well as working as a set dresser in the film industry.  Some of her works can be seen in shows such as The Walking Dead and Kevin Probably Saves the World. She is also known around Atlanta for her friendly, witty personality as a bartender in some of Atlanta’s favorite neighborhood bars for many years.  Colleen has always had an overly passionate love towards animals. Wanting to learn and do more for wildlife, Colleen joined Atlanta Wild Animal Rescue Effort (AWARE) as a volunteer on Valentine’s Day 2018.  She currently volunteers as an animal care taker in addition to being on the inventory and maintenance teams at AWARE.  In her free time, Colleen loves taking care of her 4 cats, continues to learn about wildlife, and inspires others to help make a difference. 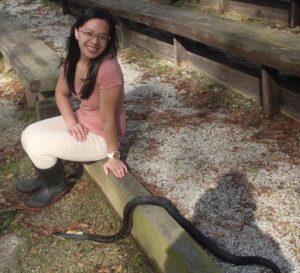 Shana has always loved to learn about wild animals so it was no surprise that she graduated  from the University of Georgia with a B.S. in Fisheries & Wildlife in 2013. During her schooling and afterwards, getting hired as a lab technician, she has researched developmental biology and genetics in reptiles and fish. Through a classmate, she discovered the AWARE Wildlife Center and began volunteering in 2015. Since then she has quickly picked up many different skills through research and wildlife rehabilitation. She plans to use these skills while in graduate school to study the many interesting and unique qualities that make wildlife a vital part of our ecosystem. Her two grey tabby cats Jack Sparrow and Rain and a basilisk named Garuda enjoy the most part of her free time. 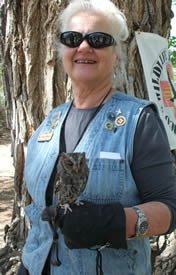 Elizabeth Penn Elliston earned an MSc from Johns Hopkins School of Hygiene and Public Health (now the Bloomberg School) in 1974. While working at JHSHPH, Penny had the opportunity to spend 2.5 years in India and several months in Chad studying the epidemiology of disease.   After moving to New Mexico  in the late 1970s, she became interested in wildlife rehabilitation and was active with a group of people founding Wildlife Rescue Inc. of New Mexico (WRINM) in Albuquerque (in 1981).  Penny joined the IWRC in its fledgling years and was on the Board for ten yes (President for two).  WRINM is an organization that uses both a central location and home rehabilitators as its all-volunteer staff. Penny’s particular interest is birds, and although specializes in hummingbirds and roadrunners, she rehabilitates raptors, songbirds and the range within the avian order.  Penny campaigns for protection of habitat and the general health of the planet. Publications indicating more of her interests can be found at Research Gate and The Journal of Wildlife Rehabilitation. 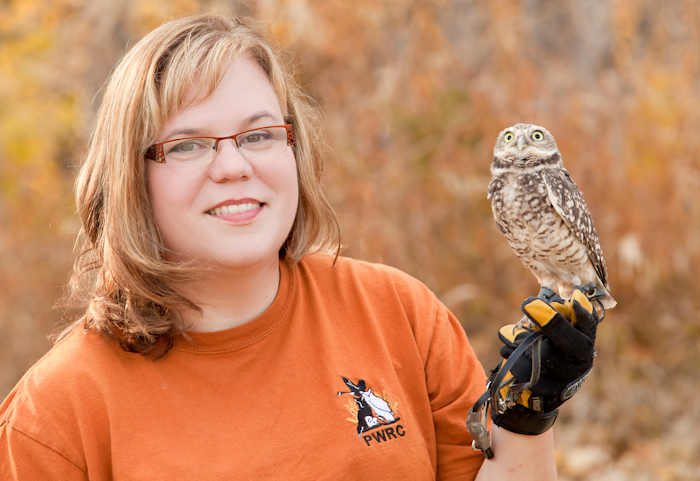 Lisa Tretiak started her career in wildlife rehabilitation in 1994 and is a founding member and President of the Prairie Wildlife Rehabilitation Centre .  In 1998, Lisa graduated with a Bachelor of Science Degree with a major in Zoology from the University of Manitoba.  From years of experience working with raptors, and successfully completing a training course, Lisa became permitted as a Master Bander for rehabilitated raptors.  In spring 2008, Lisa became the first Manitoban, and only the fourth person in Canada, to be a CWR. 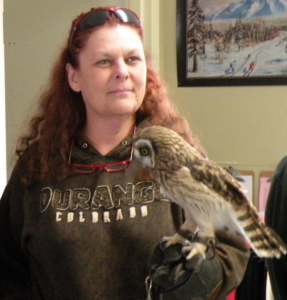 Merle Stewart, who has been a Certified Wildlife Rehabilitator since 2011, volunteered with the Alaska WildBird Rehabilitation Center from 2009 to 2016, participating primarily in education, as well as rescue and rehabilitation of wild birds ranging from songbirds to eagles.  As AWBRC’s Education Director, Merle oversaw the care and training of the center’s education birds, and presented approximately 700 educational programs.  Merle’s passion is owls, and she was caretaker for a Great Gray and a Short-eared Owl for several years.  Currently she is continuing her education in avian studies. 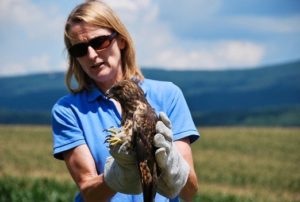 Dr. Belinda Burwell has practiced emergency medicine for 17 years. She founded the Valley Emergency Veterinary Hospital in 1998 and the Blue Ridge Wildlife Center in 2000.  She founded Wildlife Vet Care (WVC) in 2015.  Dr. Burwell is a graduate of Duke University with a B.S. in Zoology, and received her Veterinary Medical Degree from Tufts University.  She has been rescuing and rehabilitating wildlife since 1988 . She also serves  on the Advisory Board of the Animal Rescue Fund, a Virginia Master Naturalist and Instructor.